FTSB was established on May 16, 1914. The bank was organized and incorporated by J.J. McGuire of McGuire Lumber Co., F.L. Sharon, H.D. Feldick, C.J. Anderson and E.B. Aukes. Operated at 125 North Main Street in Buffalo Center, the bank occupied the same building as several other banks from the town’s earlier days.

Many banks across Iowa were forced to close during the 1920s and 1930s due to the Great Depression, including First National Bank of Buffalo Center. FTSB purchased First National Bank’s former building and moved across the street to 201 North Main Street in 1935. That same year, the bank opened an office in Lakota, which had seen two banks close due to the Great Depression.

FTSB moved to its current building at 101 North Main Street in Buffalo Center in the spring of 1971 after completing construction on a new facility.

In February of 1992, the bank expanded its operation for the first time in 58 years when it purchased the office of Home Federal Savings & Loan in Britt from regulators. Six years later, the bank received approval to open a location in Lake Mills.  A production office was opened in October of 1998 while the bank was being constructed. The FTSB office in Lake Mills opened in February of 1999.

The bank continued to expand its presence in Lake Mills in February of 2002, when it purchased Gateway Savings Bank and merged with its existing office.

In April of 2012, the bank expanded into Minnesota by purchasing State Bank of Bricelyn, MN. State Bank had been owned by the Flo family for more than 100 years.

W.D. Ley passed away in December of 2000. His shares in the bank were held in his estate until June of 2004, when they were sold to the employees of the bank along with shares from other minority shareholders. The employees have since created an Employee Stock Ownership Plan that owns more than 85 percent of the bank’s shares.

In 2014, FTSB celebrated their 100 year anniversary. A celebration was held at Lions Club Park in Buffalo Center on August 23rd, which included live entertainment, carnival games, inflatables, a petting zoo and more. A steak dinner was served in the evening by employees of the bank.

FTSB has always been proud to provide credit, quality financial products and outstanding services to the communities we serve. To this day, we remain committed to our farmers as a leader in providing agricultural banking services to our customers in north central Iowa and south central Minnesota. 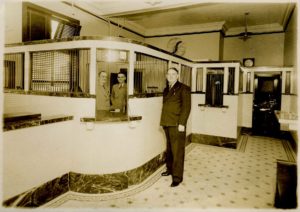